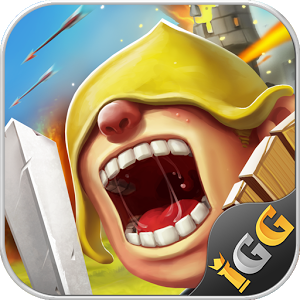 Clash of Lords Guild Castle is a mobile strategy game in which you build and defend your base. Attack your competitors for resources and start battles to rank up quickly. Almost identical to Clash of Clans but in an improved way.

In this android game, your focus will be on the dozens of game heroes which can recruit to your cause and fight for you on the battlefields of PvE and PvP game modes that can run easily on a phone with a 2GB RAM.

The basic gameplay of this mobile strategy game is that as players you will gather resources over time. And use these resources to build and reinforce your town with structures, walls, and defenses.

You also get bonuses for checking in every day. Then there are gems that you pay for with real money, spending gems to speed up the building process.

The main thing that sets Clash of Lords 2 apart in this respect is that it has way more than two currencies. While also handing out experience rewards and collectible heroes. This keeps players hooked for a longer time.

Gold is also your main currency in achieving this expansion and gathered from your gold mines within your domain, via the important resource raids that you’ll conduct or other activities such as the solo campaign and reaching certain ranks.

Buildings and structures that you will have to build fall into the three core categories of the military, defensive, and resource orientated. Military buildings for example are used to unlock game modes, recruit troops and hire heroes.

And defensive contains your common walls and 8 separate towers with various functionality. Finally, resource buildings are the most limited offering only the builder shack, gold vault, and gold mine.

This also makes Clash of Lords 2: Guild Castle one of the few Clash of Clans-inspired games with only a single resource that players can generate for themselves within their base.

Players also get regular free heroes that pop up at regular intervals. To help you fill your roster with normal, good, and rare heroes (with epic being limited to premium currency).

Clash of Lords 1.0.435 for Android
androidapksfree.com